They say Ranong has eight months of rain and four months of sun. Rain falls most days in the midst of this eight month period, sometimes continuously, sometimes sporadically. The rain brings cooler weather, which is a welcome reprieve from heat and humidity. It also means donning wet weather gear for biking around town in torrential rain; desperate attempts to keep clothes, shoes and jewellery dry and discourage mould build up (green fur grows rapidly even on things you wouldn’t expect); dodging leaks from my apartment ceiling; and embracing wet weather holidays. On our short recent holiday to the popular tourist destination of Krabi, the rain caused only minor mishaps – we spent time hopping from temples to cafes in between heavy downpours and getting incredibly soaked while climbing 1200 steps to the Tiger Cave Temple. On reflection, the monsoon merely inconveniences my life here. 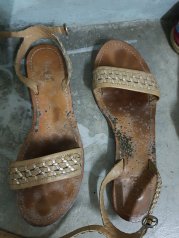 In between showers: exploring Wat Kaew Temple and a sodden self at the Tiger Cave Temple; mouldy sandals.

For others, the monsoon season presents significant challenges. For example, one our academic english students has recently been living back in Myanmar with her family. She decided to return to Ranong last weekend to sit an important exam. The week before, the Thanlwin River burst its banks causing extensive flooding in her hometown of Hpa-An, precipitating the deaths of eleven and the evacuation of some 150,000 people. Flood waters surrounded and almost entered her home. Demonstrating huge determination and commitment to her education, she waded through waist deep flood waters for several hours to catch a bus. After four days of flood disrupted travel over bumpy, windy roads culminating with a border crossing via long tail boat, she finally arrived in Ranong on the morning of said exam. The rain and consequent flooding ensued a challenge, not insurmountable of someone with her strength and courage. 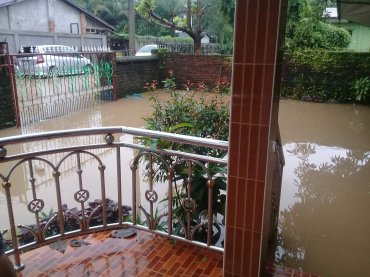 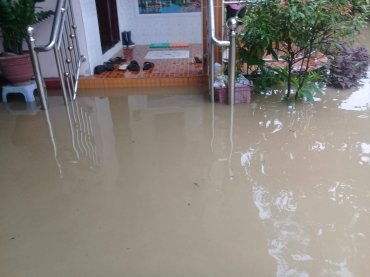 For many others in the region, recent rainfall induced disasters such as flooding and dam collapses have caused major disruption to their lives. During this year’s monsoon, there’s been a spate of events across Asia, in addition to the Myanmar flooding. A partially constructed dam collapsed in Laos, leading to the deaths of 19 and the rescue of thousands. The chaos spilled into nearby Cambodia, resulting in further evacuations. Meanwhile, Bangkok and other areas of Thailand continue to be hampered by flooding, presenting a considerable management challenge for the authorities of Bangkok, a city built on swampland which is sinking while simultaneously sea levels rise and extreme weather events are predicted to increase.

Flooding can be attributed to many things (another blog in itself), with climate change being one (albeit significant) factor in the equation. Asia is particularly at risk from tropical cyclones, whose frequency and associated economic losses are expected to rise due to climate change. In the future, flooding and other weather related events will continue to inflict disturbances on daily life from inconveniences to challenges or major disruptions, with developing countries likely to be affected more than wealthier countries. How might such future events affect you and your community?

2 thoughts on “Eight Months of Rain”