It’s been over a month since I visited Myanmar, but I feel compelled to share more about my trip to this fascinating country. My first long bus ride (of many) was 9 and a half hours, heading northwards from Kawthaung to Myeik. Instead of listening to one of my downloaded podcasts, Burmese pop music blares, accompanied by videos featuring teenage lovers. Plantation after plantation, row upon row of palm trees and bamboo huts perched roadside flash by the window. My stomach does somersaults, bouncing along the windy, jittery roads. Momentary relief is provided as we slow for road and bridge building projects, workers slogging in the heat, manually smashing rocks into gravel, hauling and shoveling dirt and burning huge vats of tar. 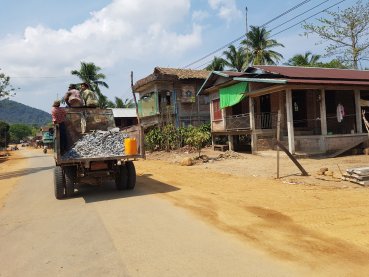 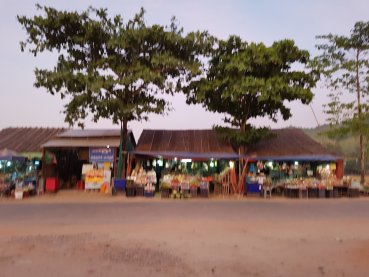 Amidst the searing late afternoon sun, I spot filthy factory fumes rising into the sky like tentacles,  punctuating the countryside. Given the surrounding palm trees, I should have known this was the evil palm oil we hear so much about. I register when I see the factory sign “South Dagon Palm Oil Plant“. Further along I see rubber trees, orderly rows extending like fans away from the road. Large rectangular sheets of rubber hang out to dry on lines – beige, off-white, darkening to caramel brown. Then huge flat barren areas bounded by mounds of earth – rice paddies anticipating the rainy season.

The urban areas I visited showed signs of ambition, hard work and development. Myeik with it’s many fishing boats juggernauting across the bay; construction sites with men and boys lugging rock and concrete with bare hands and feet. The burgeoning tourist industry of Dawei, featuring a rich culture and history (Buddhist pagodas, colonial buildings and archaeological ruins), within close proximity to stunning off-the-beaten track beaches. Further north, Hpa-An’s caves, unique geological formations hiding oft-visited Buddhist sites, are starting to attract foreigners. New guesthouses are springing up with (almost) all the mod-cons and theme parks with flashing lights adorning trees are being built. 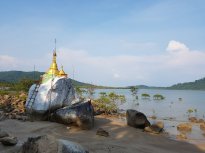 The bright lights of Hpa-An

Everywhere I go people seem to be striving for a better life, finally able to pursue economic goals after years of oppression. I’m curious as to what development will mean for Myanmar. In many countries, development has focused on economic improvement which will supposedly raise the living standards of all. Some contest whether this actually increases everyone’s well-being or perpetuates social and economic inequalities. Protecting the environment if often not seen as profitable, resulting in environmental degradation. I witnessed adverse impacts on both nature and people on my trip: ubiquitous litter, plastic on coastlines, whole hillsides being mined. Elsewhere I’ve heard of large scale deforestation, which along with plantations, have likely resulted in massive declines in biodiversity, along with other issues. Work was predominantly manual, from infrastructure development to cashew factories to fishing: people sacrificing their bodies in the name of development. 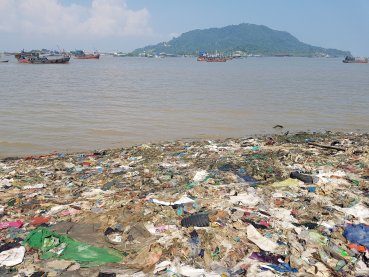 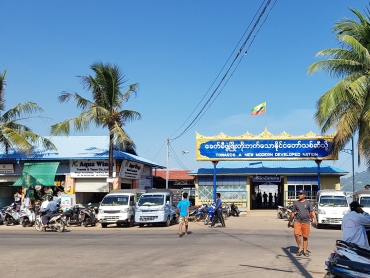 Onwards and Upwards: Photographed in Myeik – “Towards a New Modern Developed Nation”

Will it be possible for Myanmar to develop in such a way so as not to quality and well-being of nature and people? If development is to be sustainable, then equal weight should be given to the well-being of both nature and people, both now and into the future, as well as the economy. Time will tell whether this is possible.