Myanmar. A country that is currently synonymous with images of people fleeing military brutality. It is also known for its Nobel Peace Prize winning State Counsellor Aung San Suu Kyi who was famously held under house arrest by the government for 15 years between 1989 and 2010, who has been widely criticised in the Western media for her inaction in resolving the ‘Rohingya crisis’. A complex country composed of 135 different ethnicities, it has previously been colonised by Britain and Japan.

With such an ignominious human rights record and mindful of current conflict, one may question why I would choose to go travelling there. Indeed, if I had listened to online travel advice from several governments I maybe wouldn’t have gone.  To be honest, until recently, Myanmar was not on my radar as a travel destination. This changed in the last six months through my experiences working with migrants on the Thai-Myanmar border, with people who have migrated to Thailand seeking better economical and educational opportunities. I’ve gained some understanding of Myanmar’s turbulent history and its culture. Wanting to build on this and learn more about my student’s country and culture was the main impetus for undertaking this recent ten-day trip.

Some may think it frivolous to embark on a solo journey as a woman in such a country. From speaking with people from Southern Myanmar and reading online travel blogs, I was confident about my safety and my intuition proved correct. So, after obtaining an entrance visa I hopped on a long tail boat and puttered across the waterway between Ranong (Thailand) to Kawthaung (Myanmar) (stopping briefly to unwrap a plastic bag from the motor). I then travelled northwards via bus and minivan (over some admittedly pretty bumpy and windy roads) to Yangon (previously called Rangoon) via Myeik, Dawei and Hpa-An. This region has not long been easily accessible to foreign tourists, up until recently it was even difficult for people from Central Myanmar to travel there. This perhaps partially accounts for the almost total absence of foreigners I spotted during my visit.

It was one of my more adventurous trips to date, with much uncertainty about the length and nature of bus journeys and virtually no English spoken by drivers or passengers. Aside from the blaring Burmese pop music, young admiring men falling asleep on my shoulder and a woman vomiting continuously throughout one 8-hour bus ride, these journeys were also the most interesting and enlightening part of my trip (and the most difficult to photograph). Language is not needed to experience kindness; there always seemed to be someone making sure I reached my destination, sharing oranges with me or inviting me to sit with them at a roadside diner. It was in these sweet moments that I realised the hospitality and pure spirit of the people of Myanmar.

I also experienced a country with surprisingly delicious food (I ate from roadside vendors the majority of the time), super sweet tea, enough smiles to light up a Christmas tree and shambolic markets selling everything from dried fish to vibrant fabric to mangoes. A land sparkling with golden Buddhist pagodas and adored statues of Buddha, with wandering monks draped in ruby cloth.

Fish being sold at a market in Dawei 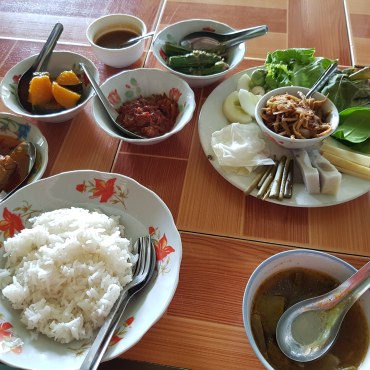 Meal consisting of rice, soup, several chosen dishes plus a platter of vegetables and condiments

The question is, is it ethical to visit a country with ongoing conflict? My next blog (due out soon) endeavours to answer this.

Connection: sometimes we feel it deeply, other times we feel strangely disconnected.
It's winter in the Southern Hemisphere and nature has slowed, becoming more muted, softer and darker.
Being calm isn't always easy especially when there is a lot going on around you.
Being calm doesn't always feature strongly as we navigate the ups and downs of life.
Courage: Courage does not always roar. (Photo by @unsplash )
Every action you take has the opportunity to create ripples that disrupt, irritate, anger or inspire, encourage and support.
Loading Comments...
%d bloggers like this: